Each region list initially shows all of the regions of that type in your shop. The drop-down field above the list lets you filter it to show only regions that are used by tax or delivery rates, or only regions that are not in use. You can click on the column headers to sort by any column.

To import the regions used by a courier, select the courier from the drop-down field below the region list and click Import.

To manually create a region, click Create new region and then edit it in the same way as described below.

To edit a region, click Details on the corresponding row in the region list. The region details form will be displayed, letting you change the region name, and add or remove countries.

To add a country to the region, select it from the drop-down field and click Add. To remove a country from the region, click the cross next to the country you wish to remove.

For delivery regions you can control which postal codes should be included for each country. By default the whole of the country will be included.

Click Only include these postal codes to limit the region to certain postal codes within the country. For example, entering SW1A for the United Kingdom, as shown in figure 1, will mean the region includes only postal codes starting with SW1A. Include postal codes by typing in the text field and clicking Add. 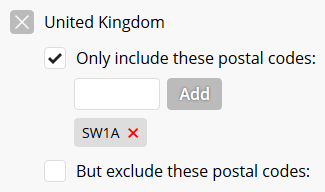 Click But exclude these postal codes to exclude certain postal codes within the country. For example, entering SW1A for the United Kingdom, as shown in figure 2, will mean the region includes all postal codes except those starting with SW1A. Exclude postal codes by typing in the text field and clicking Add. 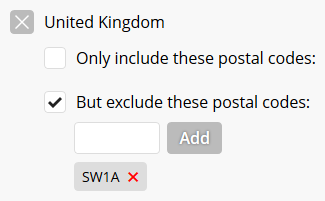 You can also use both inclusions and exclusions at the same time. For example, including SW but excluding SW1A for the United Kingdom, as shown in figure 3, will mean the region includes all postal codes starting with SW except for those starting with SW1A. 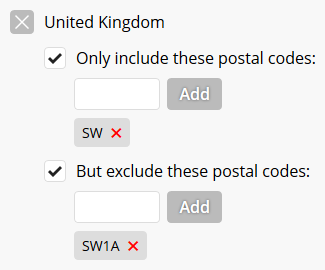